This guide provides information about ORCID (Open Researcher and Contributor Identifier) and its utility for researchers at WSU.

What are ORCIDs and ORCID, Inc.?

ORCIDs are Open Researcher and Contributor Identifiers. They are provided to researchers as unique identifiers to distinguish their research from that of others who may have similar names. ORCID, Inc., is an international, not-for-profit organization that manages the registry of researchers who have claimed ORCIDs. For more about the organization, see the ORCID FAQ page.

Who is using ORCID?

ORCID is being used by hundreds of research institutions, funders, and publishers.

In 2016, eight publishers announced their plan to require ORCIDs as part of the publication submission process. These publishers included: Science, Public Library of Science (PLoS), IEEE, eLife, EMBO and Hindawi. Nature Publishing Group, Elsevier, and Wiley also have accepted ORCIDs since 2012 and may move toward requiring them as the system matures.

How do I register for an ORCID ID?

If you do not already have an ORCID ID, you can claim one at https://orcid.org/register. Alternatively, you can claim an ORCID ID by going through MyWSU. Use your WSU email when you register, and set your privacy preferences using the options listed. Note that "public" is the default option for your profile, while "limited" allows you to exchange information with select organizations.

How can I add citations to my ORCID profile?

Please see these instructions for adding citations to your ORCID profile.

Should I have both a “personal” and “institutional” ORCID ID?

No, you should have only one ORCID identifier. If you previously signed up for an ORCID ID at the request of a publisher or other institution, we’d encourage you to link that ID to WSU systems. The advantage of this institution linkage is that you can import citations from your ORCID account into WSU systems like the annual activity reporting system and save yourself time on re-entering information.

What do I do if I have multiple ORCID IDs? 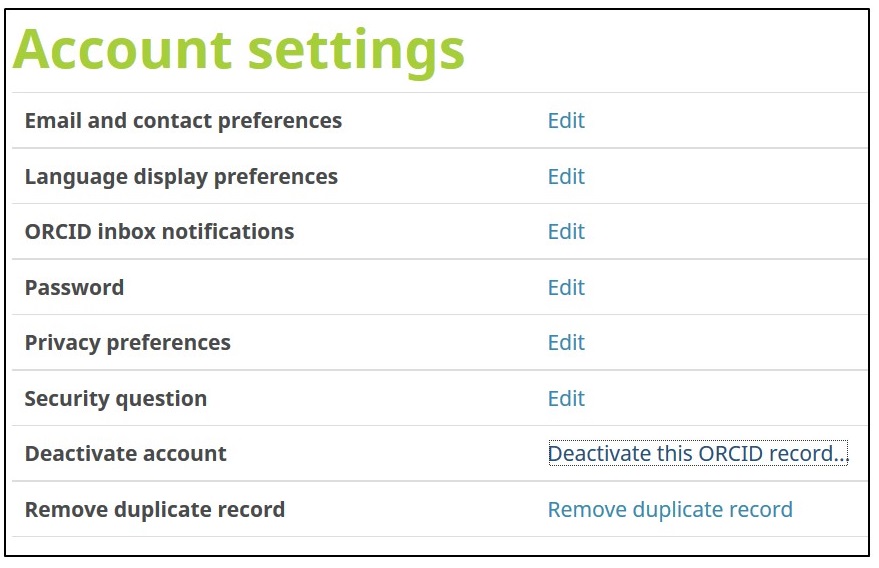 I have an ORCID ID but would like to allow someone else to edit it. How do I do that?

Log into your ORCID account and select "Account settings" at the top of the page. Scroll down to the "Trusted individuals" section. Here you can designate another person who can then edit your account.

How can I link My NCBI, SciENcv, and ORCID?

In case you do not know about SciENcv, it is a CV tool that allows you to maintain grant applications, biosketch information, and progress reports associated with grants. SciENcv was being developed by the NIH along with the DOD, DOE, EPA, NSF, USDA, and the Smithsonian. See more about SciENcv on this background information page.

You can set up SciENcv by logging into (or creating) your My NCBI account. Next navigate to the My NCBI home page and click on the box marked SciENcv. You can then create your SciENcv profile either by using your eRA Commons account or by manually entering information. As you work on setup, look for the link to add your ORCID ID to your SciENcv profile.

How do I use my ORCID ID?