(watch this space for updates as you work on this project)

9/30 - I've started doing the screencasts - you will see "demo" links. This will be an ongoing project.  They load slowly so give them a few minutes at the start!

This is a compilation from other pages  - it is a starting point, so you may want to look at other WSU Libraries government document library guides, including:

Note: If you think something from one of the other library guides (or from another source!) should be on this guide, please email me {Lorena} at oenglish@wsu.edu.

Locating a Law to Write About: Statutes at Large ; Identifying its Bill number

There are many access points for starting a legislative history, and you already may know what law you want to trace, but if you don't, you may want to start with the Statutes at Large, in order to identify a bill that definitely became law.

The Statutes at Large are available in print in the Terrell reference area (Terrell Reference Doc GS 4.111)  but please use the online version from the Library of Congress. Note that joint resolutions are not broken out, and to locate them you will have to open the full S@L PDF and search (they are located at the end of each session before the session index).

About the Statutes at Large:

Every law, public and private, ever enacted by the Congress is published in the Statutes at Large in order of the date of its passage. Until 1948, all treaties and international agreements approved by the Senate were also published in the set. In addition, the Statutes at Large includes the text of the Declaration of Independence, Articles of Confederation, the Constitution, amendments to the Constitution, treaties with Indians and foreign nations, and presidential proclamations."

via The LoC American Memory Project "

Locating a Bill Number from the Statutes at Large

​This is a bit complicated, because bill numbers were not included in the Statutes until 1903. For those earlier laws:

Method 1: Search for the long title you found in S@L or elsewhere (in quotation marks in a date-appropriate fulltext or index source such as a House or Senate Journal or its index)

Method 2: Use the Legislative Reference Checklist: The Key to Legislative Histories from 1798 - 1903 by Eugene Nabors (Hol Ref KF 49 .L43 1982). Lorena also has a personal copy and you can use it in her office/at ref desk/etc. by appointment.

[This is also available online (at least for now) - you can use the ASCII table found at https://github.com/unitedstates/nabors/blob/master/table.csv - you will have to view it carefully. The order of information is as below, separated by commas in the online version but asterisks here:

Nabors' book, page 428, Congress 56, Slip Chapter 10, Slip number 10, Statutes at Large vol. 32, p. 1232, signed on 2/27/1903, and it is Senate Joint Resolution 159. NOTE: the file has the *wrong Congress* for this entry and all others for the 57th Congress (starting at line 13357, Nabors page 416, and going to the end of the file) so ignore that and use the signing date and S@L starting page number! But watch out...its possible there were two or more bills that have the same approval date and S@L page number! This is where the "Slip Chapter" designation for each law becomes important. You will sometimes see a S@L citation with a chapter designation. 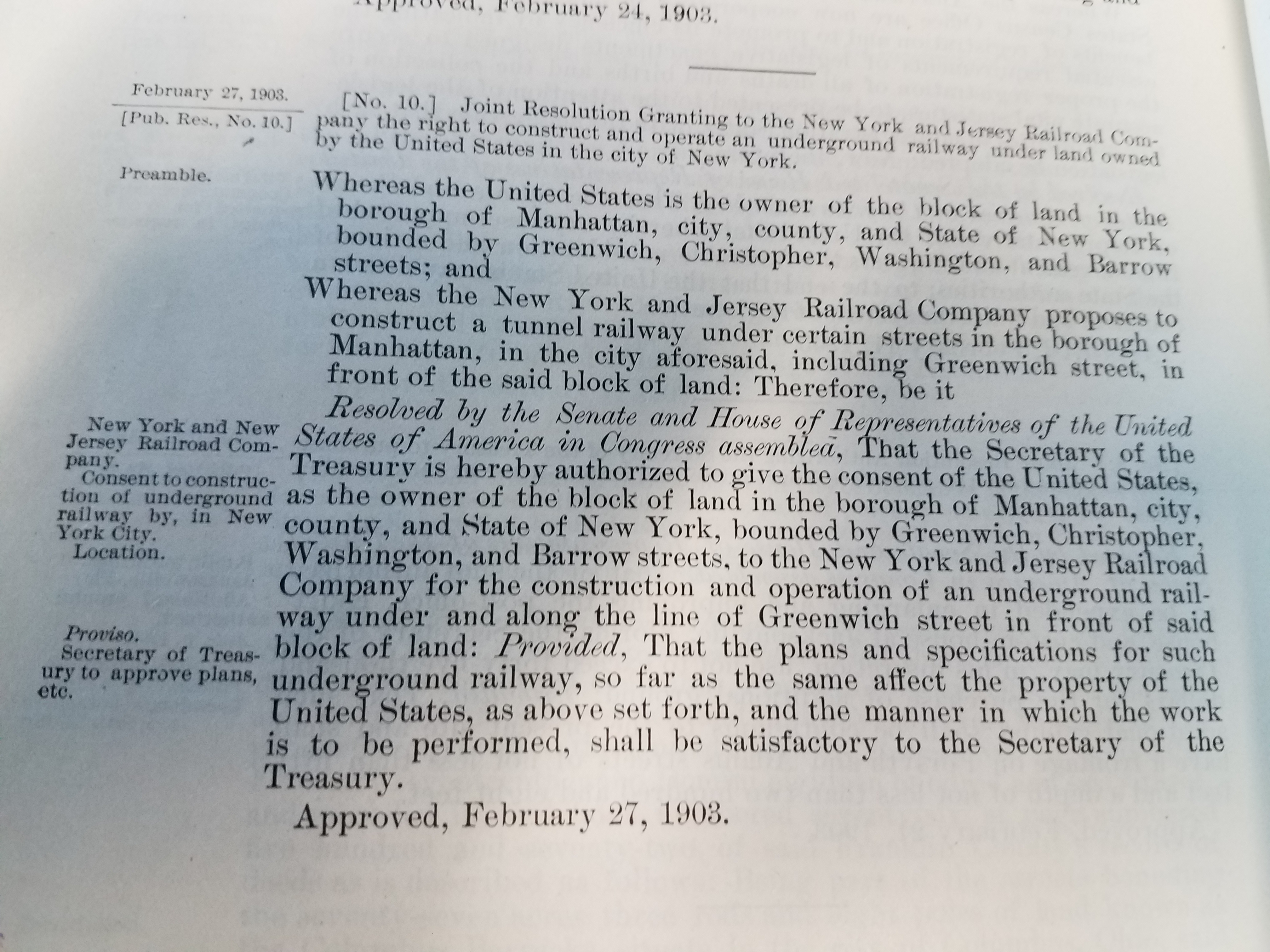 Locating Bill Texts (not passed laws) at the WSU Libraries

** Important note re: A Century of Lawmaking - I found an example in the Senate where after the original bill was printed, as I kept clicking Next Image, it took me to successive versions of the bill, including amendments, So be sure to keep flipping the pages until you get to the next bill to make sure you are seeing everything you can potentially see. Make sure you look for these in Congress.gov as well - there will be tabs for actions, amendments, etc. that indicate if there is any content in them.

House and Senate Journals (and Their Indexes)

What are House Journals and Senate Journals (and their Indexes), and how can they be used?

Summaries of congressional floor action (including names, dates and CR/CG/etc. page numbers). Good for providing an outline for your legislative history, to be filled in and expanded with the actual text of debates and speeches etc from the CR/CG/etc, testimony and investigations from congressional publications, etc.

Note that the Congressional Record (1873 to current) also can be used for this (best to use both ;-) because many volume contains a “History of Bills and Joint Resolutions” or similar table section, which includes citations to relevant floor debates as well as congressional reports and documents. You can find all the indexes at Sessional indexes 1789 - 1963 (HathiTrust) - includes indexes to all series - there will usually be some sort of History of Bills and Resolutions or History of Bills, but not always - there isn't a lot of consistency really until we get to the CR. Note that volumes that include multiple Congresses do not have cumulative indexes; each session succeeds each other. Be sure to watch out for things like separate indexes to Appendices and Statements.

Locating House and Senate Journal Indexes in A Century of Lawmaking:

******Demo screencast (WSU log-in required; email me if you need access). Note: I will be redoing this one, think.

Journals from 1789-1875 are also in A Century of Lawmaking (Library of Congress American Memory Project).

1. Select link for either House Journal or Senate Journal (Maclay's Journal is a supplement for 1789-1791)

2. Browse to and select your Congress, then select your session. Remember that if it was not introduced and passed in the same session you may need to look at following sessions to see additional activity before passage. In some cases bills may have been introduced (but not signed into law) in earlier Congresses as well, and it may be useful to look up prior attempts to pass the same or a similar bill to get more information as you discuss the history of the bill's subject and its preformulation phase.

3. You will see a text transcription of the first page of the document. Look down at the bottom of the page, and click on Navigator (note - not on Next Section! Navigator is a separate link).

4. This will show you the Journals by date. If you already know your date(s), you can go to it and search it/them in your browser with your keyword or bill number using <control> F; if not, look at the bottom of the page and click on Index.

You will also want to use the Search Function to make sure you are seeing everything.

Upon introduction, a bill is sent to a committee, subcommittee, select committee, or (especially in the case of the early years) the Committee of the Whole for the chamber. If you do not know where the bill was referred to, check its introduction in the Congressional Record​/Globe/etc. You will also find it in the relevant House or Senate Journal or Journal indexes.

Note that there were a lot fewer congressional/congressional committee hearings in the nineteenth century than there are today.

Note: Hearings may be topical or investigative, and not tied to a particular bill

All Congressional documents from the first 14 congresses (1789-1816) and some additional years are known as the American State Papers. Records are not complete due to the Capitol fire of 1814 and the lack of record-keeping. The ASP is available online at A Century of Lawmaking: American State Papers.

"The Serial Set is a somewhat changing composite of almost all House and Senate reports and documents published since 1817. It generally includes committee reports related to bills and other matters, presidential communications to Congress, treaty materials, certain executive department publications, and certain non-governmental publications.

The Serial Set does not normally include the text of congressional debates, bills, resolutions, hearings, committee prints, and publications from support agencies of Congress such as the General Accounting Office and the Congressional Budget Office. However, by special order (usually in the Senate) some 300 selected hearings and many bill texts were included, especially in the 19th century and early 20th century.​" http://www.llsdc.org/serial-set-volumes-guide#overview

Note: The Serial Set is ongoing, but our paywalled database access to it via Readex only goes to 1994. For current volumes see the Serial Set at govinfo. It is always running behind because it takes so long to gather and process everything! You will see that it is currently being digitized back to the first volume and will eventually be freely available (but without the item-level indexing that we get via our Readex database version).

"The serial number is a unique number applied to each book in the series of congressional publications running consecutively from the 15th Congress [1817-1819] [to current].

Note: "Documents and Reports can be located using the volume or serial number but should be cited using the publication number and Congress and session number.​" - from ACoL:SS

Reports - "usually from congressional committees dealing with proposed legislation and issues under investigation" Good for research/background/intent. May include notices of hearings with access points for finding them (i.e. terms, date, committee, bill#, etc.)

Documents - "all other papers ordered printed by the House or Senate. Documents cover a wide variety of topics and may include reports of executive departments and independent organizations, reports of special investigations made for Congress, and annual reports of non-governmental organizations. During the late nineteenth and early twentieth centuries, executive-branch materials were also published in the Serial Set."

​Locating Committee Prints  (Usually not included in the Serial Set)

Floor Action Publications for the House and Senate: The Congressional Record and its Predecessors

​The Congressional Record and its Predecessors

Note: A Century of Lawmaking is great, but it can be hard to use and sometimes links don't work (I have reported this!). You may find the PDF versions available through the HathiTrust Digital Library (WSU is a member, but these items are all out of copyright anyway) to be easier to work with as they are standard PDFs.

Note: Sessions of Congress with Corresponding Debate Record Volume Numbers (1789 - Current)   will give you the appropriate volume numbers in the Aof/CG/CR etc by Congress

Note: You can find indexes to all of these in one place at Sessional indexes 1789 - 1963 (HathiTrust)

For a more detailed look at these titles and their history see Overview of the Congressional Record and Its Predecessor Publications.

Ending Back at the Statutes at Large

After (maybe) starting at the Statutes at Law to find a law to trace, we return to find the law as passed, concluding your legislative history (unless you want to discuss any amendments that went into effect after passage, or new laws that replaced your original law).

The Statutes at Large are also available in print in the Terrell reference area, but please use the online versions (link goes to the Library of Congress version, but they are  available from many other sources).

About the Statutes at Large:

Every law, public and private, ever enacted by the Congress is published in the Statutes at Large in order of the date of its passage. Until 1948, all treaties and international agreements approved by the Senate were also published in the set. In addition, the Statutes at Large includes the text of the Declaration of Independence, Articles of Confederation, the Constitution, amendments to the Constitution, treaties with Indians and foreign nations, and presidential proclamations." via The LoC American Memory Project

Going from the law as passed (slip law, S@L, PL#) to the Law in its final interpolated form (US Code)

or is it this? UNITED STATES CODE CLASSIFICATION TABLES (house.gov)